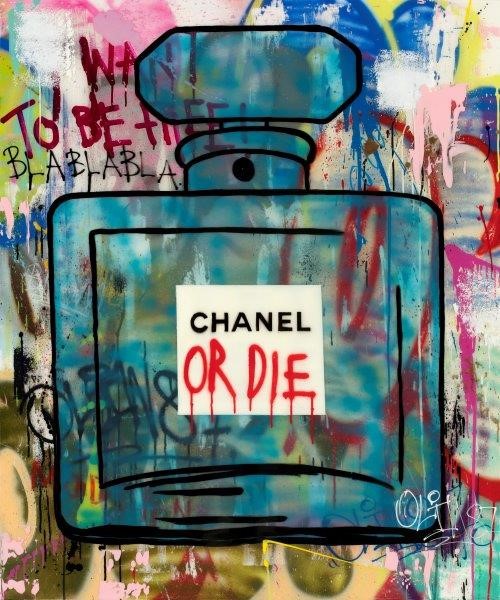 “I don´t understand anything at all” 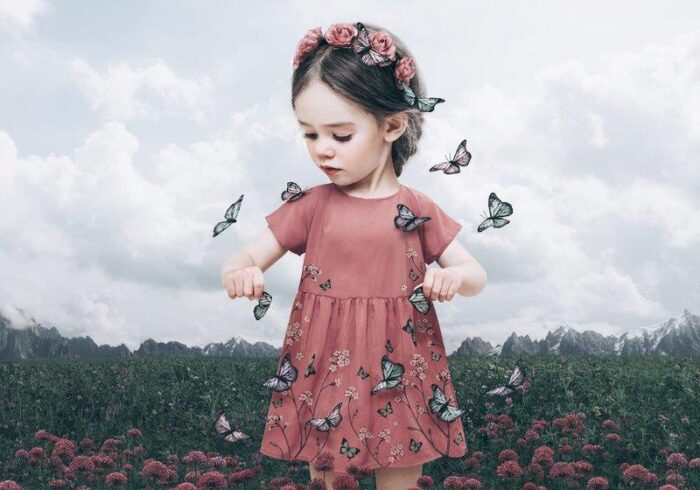 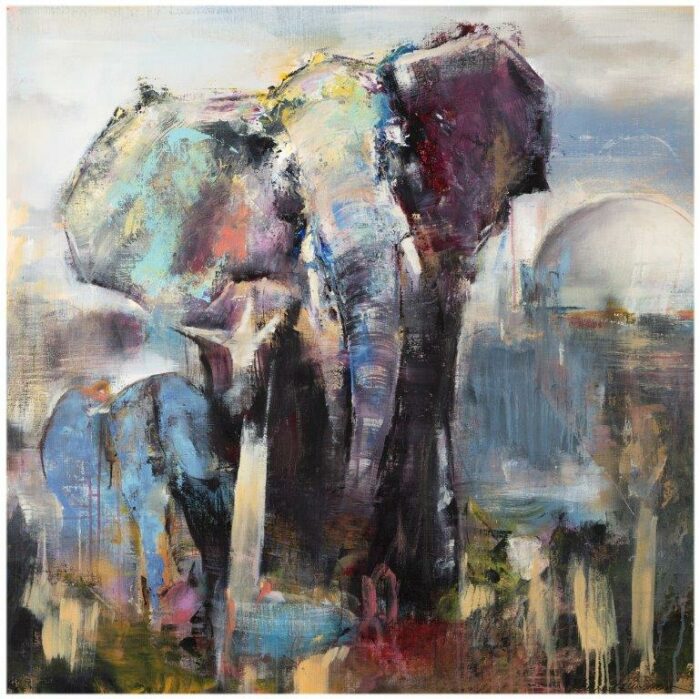 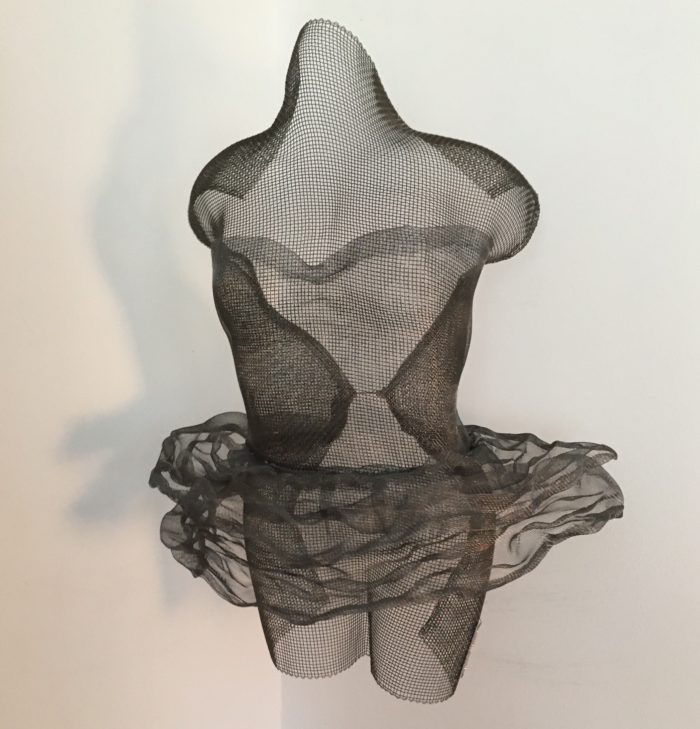 More or less a self-taught artist, with a background as a fashion model in Europe and a trained nurse in Sweden.
She gets her inspiration from fates, fashion, and dance. After some courses in sculpture, she realized that this was her thing to do.
The classic torso is often depicted in her work.
She combines the bodies in very hard iron mesh with soft aluminum, copper or brass, which gives the sculptures life and movement.
The light is also very important and a spotlight on the sculptures will give them beautiful shadows.
She creates strong women that stand up for themselves and for others.
The dance theme, is a frequently recurring theme and has always been a great interest of hers and also old movies with beautiful dresses.
She also creates big dresses in aluminum often combined with recycled old jewelry. 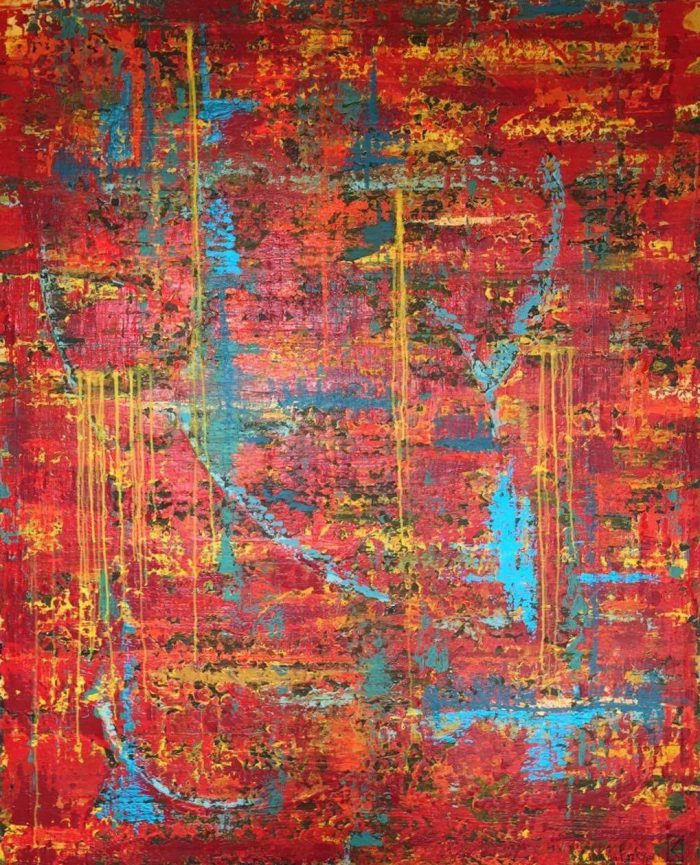 Camilla Eriksson
I paint because some feelings just have to be shared.Strong ones, may they
be good or difficult. My paintings tell me their own stories. About me. About things I’ve felt and
experienced. Blue periods? More a need to dive into blue, red, orange, blue or any other colour for a
while. While painting I take time to observe. And feel. And get obsessed. It’s
all strict, wonderful and crazy self-indulgence. My surroundings know there are feelings I need to
express.
Painting is an amazing journey. People share their thoughts, emotions and inner
life with me throughout the process. And it’s a buzz to see perfect strangers fall in
love with my work, seeing a filthy factory window, the wilderness of Greenland,
figures that may be penguins, cranes or Masai tribes – or something completely
different, and make sure the painting finds its home.
It’s seriously moving, and I love all the interpretations. After all, it’s in the eye of
the beholder. 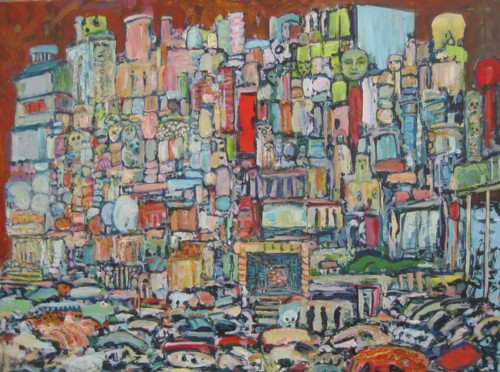 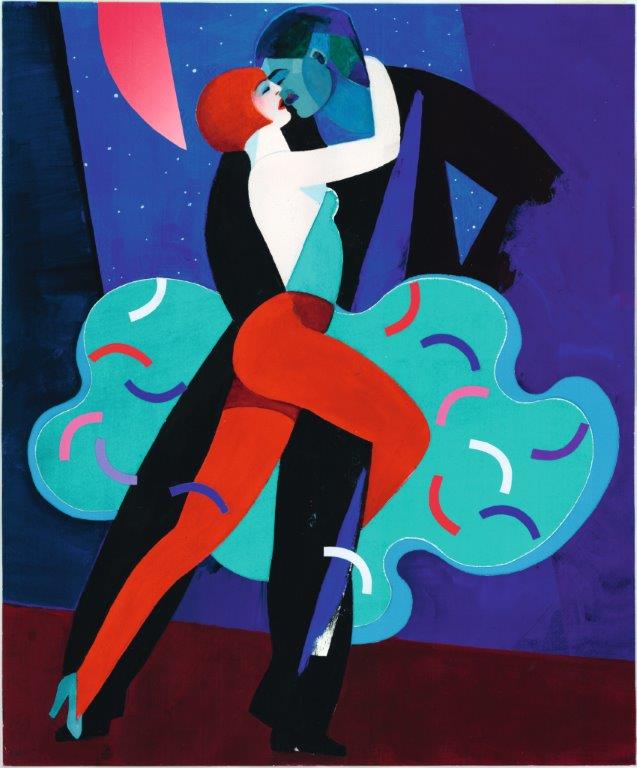 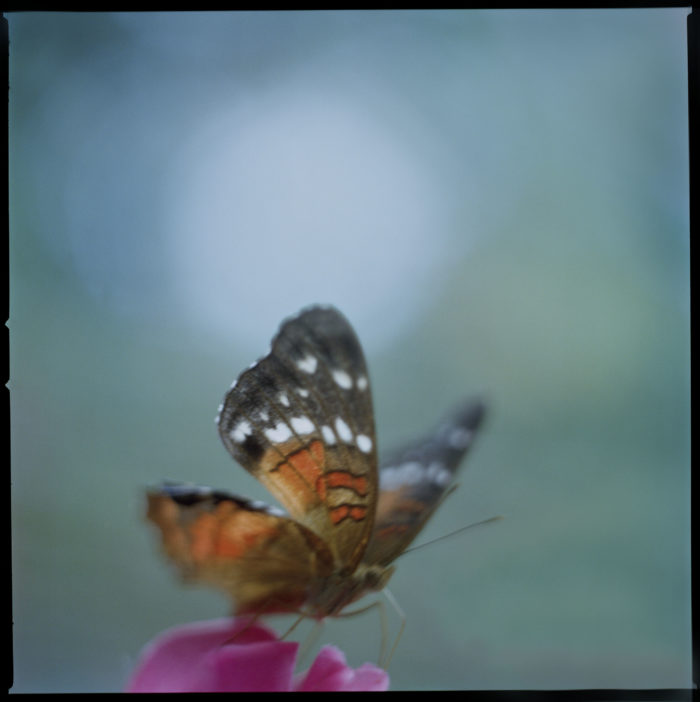 Anna Clarén’s photo art is highly autobiographical. After having seen her latest works I’m tempted to say skinless. Given the title Under, they differ from everything she has built so far on her career. Under might refer to under the surface but could also – in Swedish – be understood as a haul between then and now. Butterflies are responsible for the transport. Nameless butterflies who flutter in the tepid air in Fjärilshuset (The Butterfly House) at Haga. The butterflies bring her back to square one. It was with the butterflies she almost unconsciously entered her photographic path, a couple of decades ago. Then life and success interfered and the butterflies disappeared, maybe because she never was very interested in them to begin with. However, when life demanded a restart they returned. In Under – to borrow from her own words – she merely uses them as symbols of resurrection. I myself even understand them as the artist’s alter ego, the final stage of turning yet in a fixed manner. This time it doesn’t begin with a young girl’s dream of a fulfilling career as a photographer but instead at a  turbulent life crisis that leads to something new and unexplored.

My first encounter of Anna Claréns photographic art took place at Fotografiska in Stockholm during the spring of 2013.  The museum showed Close to Home, an exhibition which has since then reached far and wide and generated a photo book with the same name. It made an immense impression. The motifs were trivial and self-biographical, collected from her closest environments: her kids and husband, her parents and their parents, nature sceneries from Biskops-Arnö, Stockholm or Skåne, places where she had lived during longer or shorter periods. Clean pictures, minimalism stripped off everything but the most essential. Exquisite. What had them differed from all I had seen so far was however, the light and the shimmer of fragile happiness that radiated from it. But it was also alarming. Almost every photo was so filled with light that it seemed to be overexposed. Just a bit more light and the motif would fade and fly away as the morning mists in early summer, as the memories of the past.

The stillness and silence in Close to Home is total and leads thoughts towards artists such as Jan Vermeer van Delft and Wilhelm Hammershøi, both known for creating big and unforgettable art out of trivial acts and empty rooms. But there ends all similarities. Both Wermeer and Hammershøi are quite neutral when they approach their motifs; Anna Clarén loads her poetical and beautiful photos with a minor sued sadness emanating from the understanding of the fragility in life and the moment. It is an understanding that gradually has matured after her award winning debut book Holding, a sort of photographic diary starting from the summer of 2006.  The book awoke the curiosity of the journalist Christoffer Barnekow. He wanted to learn more about her life and the art and met her for an interview in 2009. It was published in Konstkatalogen No 1 the same year. Talking about how her photos had become more and more pale and almost ethereal she answered: “I fear the catastrophe. I’m afraid it will come before I even know it is a catastrophe. I see an accident in slow motion. It will blow, but I don’t know where. Maybe it is this pale. Soon it’s over. Soon it’s gone”.

In 2009 Anna Clarén also started the project Close to Home – all in all about 60 pictures. As an epilog she writes: “Most pictures are taken during 2009 to 2012, during a period when an immense lot of beautiful things were given to me. I have had three children and a husband. We are living in a house in the middle of the beautiful Swedish nature”. And the photos are shimmering of light. And sadness.

In Under the tone is quite different. The tender sadness is transformed into a deeper minor and the color scale is much darker than in Close to Home. The evil forebodings seem to have come true. The family is no longer the focus, nor is the home. In some short lines Anna Clarén writes those grave disappointments a couple of years ago which made her life turn, made her disappear under the surface, blindly swimming. More concrete: She fled to Fjärilshuset på Haga where she more or less lived for six long months, delegating her emotions to her camera and filling thousands of photos with a new poetry. Touching, beautiful. Also this form of poetry is fragile but also darker, more troubled and evidently hunting a resurrection and a new life, a new light. And it is coming. In most of the photos there is, far away, a hint of light to be seen. A dawn. A new day and a new freedom wait outside the secured glass walls.

I’m not very interested in butterflies. I do not know the latin names of the different species, how long they live or what they eat. I am after the feeling of being in a state of transition. Of being in-between the old, the ingrained and the safe life behind you and the new, without knowing what the new will be like.  Some might call it a crisis. I think most of us have been there. Maybe in having to go through a divorce or having to say good-bye. In moving away or in changing jobs. This gap in-between can be scary and lonely place.

In the winter of 2015 life took me back to that gap. A series of disappointments forced me to change path, to give up much of what had been my identity. Nothing was the same. In search of something familiar or in search of comfort I went to Fjärilshuset in Haga in Stockholm. During 6 difficult months I took pictures almost every day. One hundred rolls of film were exposed in my camera.

Often I had the feeling of swimming under water. I held my breath and focused on swimming. I told myself –almost there, just a little more, you can do it. Maybe you have to sink, to touch bottom before life can turn into something else? I want to tell a story   about rebirth. A larva that becomes a chrysalis and finally a butterfly.

Anna Clarén was born in Valje and grew up in Lund in Skåne in the south of Sweden. Her breakthrough as an artist came with the series “Holding”. Her book with the same name was awarded “Photo-book of the year” by the Swedish Photographers Association in 2006. She has also produced the series “Puppy Love” and “Close to Home”. The latter project was exhibited in 2014 in Malmö Museum. Anna Clarén also formed a part of the exhibition “A way of life” on the Moderna Museet (Museum of modern art) in Malmö and Stockholm the same year.

Her latest photo-series “Under” is now exhibited in its entirety for the first time. 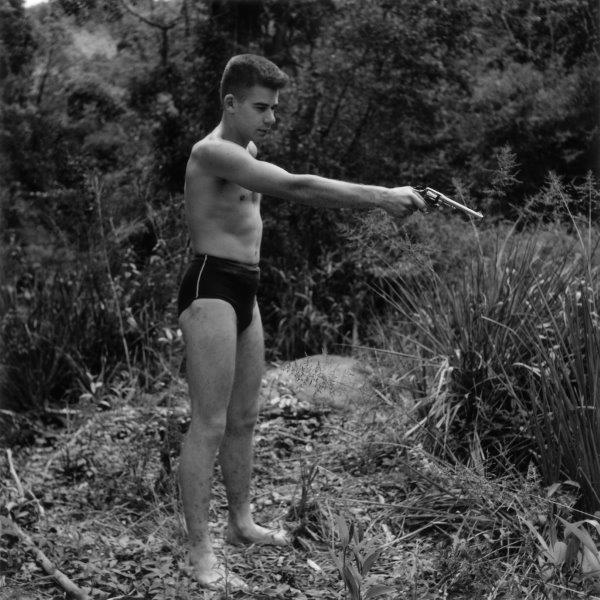 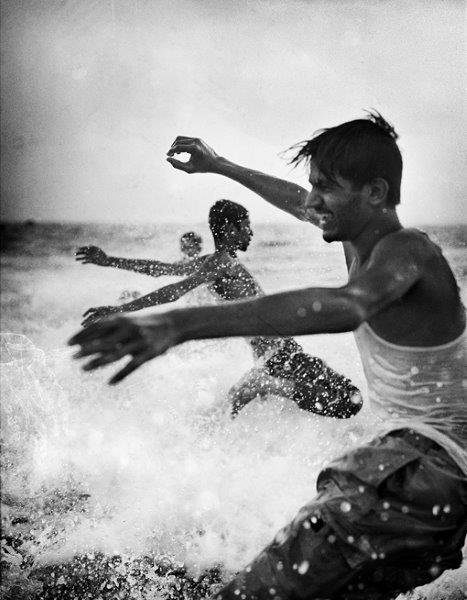 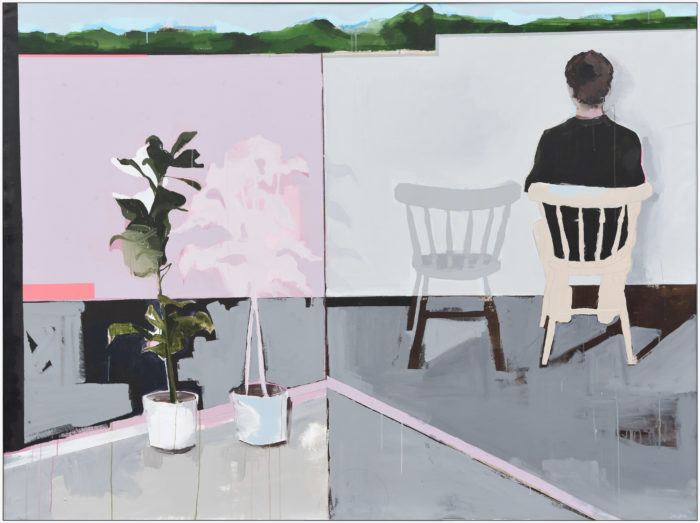 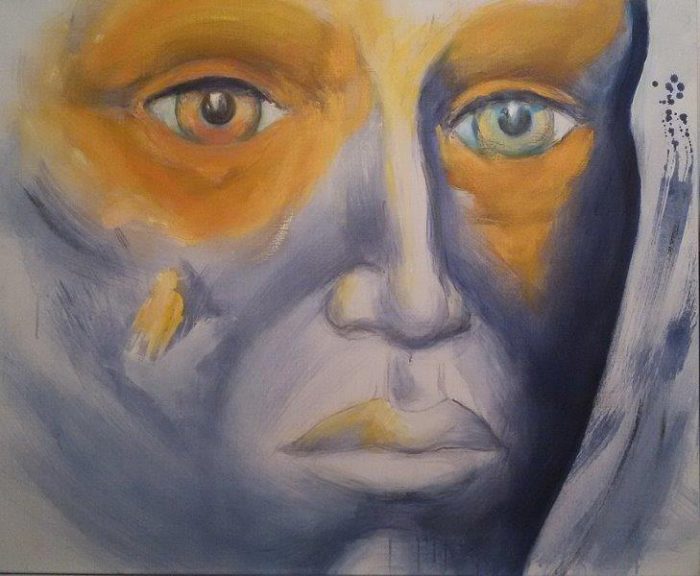